Recipes How to Make Your Own Bread at Home Easily

Bread is one of the typical foods that has a long history. 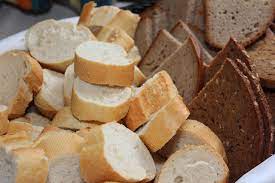 Since thousands of years ago, bread has become one type of food that is timeless.

Initially, bread was made with wheat and treated with water to form a dough.

The dough is baked on the stove over medium heat and the result is a firm, long-lasting loaf.

One type of bread that is not foreign to the public is plain bread. Bread is one of the mandatory breakfast menus, especially for foreigners because the staple food there is wheat which is the main ingredient for making bread.

This white bread is made from wheat flour that is high in fiber or wheat flour which is good for consumption and is very suitable to be eaten as a breakfast menu in the morning because it has high fiber, carbohydrate and protein content, especially if it is added with honey or milk, the taste is definitely delicious. will be more delicious and provide high calcium for body growth.

Before discussing further how to make your own delicious white bread, let's look at some types of white bread that are good for health below.

5 Types of Bread that are Good for Health

Most Indonesians think that if you eat breakfast or eat you have to use rice, if you don't eat rice, you will think you haven't eaten. Unlike the Europeans.

In Europe, it is customary for breakfast with bread as the main menu, especially white bread.

This wheat bread is brown. but sometimes, the dough is first mixed with white flour and wheat bran in the manufacturing process. Its function is to provide a slightly softer texture.

This bread comes from Germany and has a slightly sour taste. The dough does not contain sugar so this bread is considered healthy. This type of bread is quite difficult to find in Indonesia.

This bread is made from rye and has a heavier texture than others due to its low gluten content. In addition, this bread has a high fiber and vitamin content.

This bread is widely found in Indonesia with the characteristic of having a slightly coarser texture than ordinary white bread. The difference with regular wheat bread is the addition of whole grains such as flaxseed, soybeans, or sunflower seeds.

Here's how to make your own white bread at home, but using the basic ingredients of wheat flour which will be high in fiber content.

First of all mix all the flour, sugar, salt, Anlene milk powder, yeast and water.

Then knead on a floured surface until the dough becomes smooth.

Leave in a greased container and cover with a cloth for 2 hours.

Then put the dough into a special loaf pan that has been greased with butter, let stand for 75 minutes until it expands.

Place the baking sheet in the center of the toaster and bake the bread at 180°C for 1 hour or until fully cooked (golden brown).